After Frozen came out, everyone and their mom learned the words to Let it Go either by hearing it overplayed on the radio or over-sung by a local small child.  I, on the other hand, learned the words to the majority of the songs on the Frozen soundtrack so I could belt them out in proper Broadway style on exciting afternoons spent home alone.  As I sang For the First Time in Forever for the thousandth time, some things about Anna hit me that hadn’t occurred to me before.  When I went on to sing Love is an Open Door and related that to the other songs, I realized that there are some things made obvious about Anna that you only really see in her songs.  So, here is a blog post about the things that I’ve discovered. 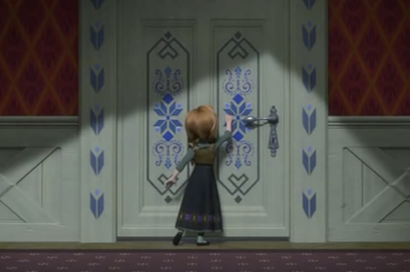 1.  Do You Wanna Build a Snowman

This song serves the purpose of backstory, as well as a nice we-don’t-want-to-waste-time-watching-them-grow-up-so-let’s-speed-through-it montage.  I didn’t have any “OHHH!” revelations during this song, but I think it’s important, throughout the entire soundtrack, to note how often Anna mentions doors.  It’s a pretty significant factor, and people scoot right by the fact that Anna has been shut in as well as shut out her entire life and knows what the back of a door looks like better than she knows what her own sister looks like.

I’ve also seen some uproar about the idea that Anna wasn’t enraged with her sister for shutting her out and I have a couple responses to that.

A.  She grew up with it.  Her parents normalized Elsa being locked away, and since Anna was a young child she’s seen her sister’s bedroom door shut.  She has faint memories from before that, but honestly, that would’ve been blurred as she grew older.

B.  Anna doesn’t hold grudges.  Ever.  It’s not so much that she’s stupid or naive or forgiving, she’s just not that kind of person.  She’s aware that it takes up too much energy to be that angry all the time (note: Elsa and her fear/anger at her self). 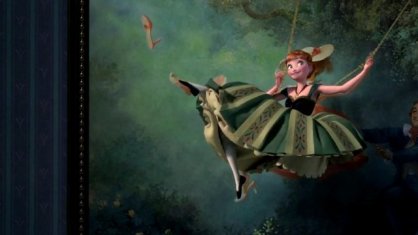 2.  For the First Time in Forever

This song is the most important in understanding Anna’s character.  There are a lot of obvious lines that backup what Anna has gone through.  Somehow I missed a lot of the substance of this song the first few times I heard it.  This song is the main reason for this blog post, though, so let’s go through it piece by piece.

The first indicator that Anna has led a quiet, lonely life is the line “There’ll be actual real live people, it’ll be totally strange!”  Anna has hypothetically had maids and servants and other people to socialize with, but she’s had zero people her age and no family since her parents died.  We don’t know how involved her parents were before they died, but it’s safe to assume they were pretty preoccupied with running a kingdom and trying to figure out what to do with their ice-spitting daughter.  This is the first real event happening in Anna’s life; the first time she’ll be around people her age (for the first time in forever I won’t be alone), and although she could socialize with servants/workers, it wouldn’t have been looked upon positively considering her status.  And she obviously could never marry any of them, which brings me to the next point.

This is Anna’s first opportunity to socialize, yes, but it’s also her first chance EVER IN HER WHOLE LIFE of finding someone to possibly love (I know it’s totally crazy to dream I’d find romance, but for the first time in forever at least I’ve got a chance).  I know most everyone loved the realistic take Disney took on the barely-know-you-let’s-get-married engagement between Hans and Anna.  Elsa and Kristoff (who is, by the way, the most reasonable person in the entire film) were shocked and pretty appalled at her naivety and eagerness.  The thing I wish more people realized before laughing off Anna’s enthusiasm and determination in marrying Hans is that she – again – has had zero time to socialize with anyone her age, let alone anyone who would be eligible to marry her.  She’s never even had a friend besides Elsa when she was young (then we’ll laugh and talk all evening, which is totally bizarre, nothing like the life I’ve led so far) and the engagement to Hans actually makes perfect sense when you consider the idea that Anna knows their heritage needs to continue in order for them to maintain control of the kingdom and Elsa is clearly not ever coming out of that room, PLUS Anna is lonely.  She’s super duper lonely and has been her ENTIRE LIFE.  She wants friends.  She wants human contact.  She wants someone to smile at her.  This is legitimately the only time she can ever – EVER – foresee being around anyone at all, so her engagement makes PERFECT SENSE because when would she have the opportunity to find anyone to marry ever again? She clearly doesn’t get invited to balls, and they’ve never even had a ball ever in the eighteen or so years she’s been alive, or at least the thirteen since her memory was messed with.  The point is, this is her only hope at making any friends or life-long companions of any kind so it was actually kind of perfect the way it worked out (I know it all ends tomorrow, so it has to be today), if you ignore the fact that Hans is a complete narcissist with terrible intentions.

If the reality of what this song title means from Anna’s perspective (as well as Elsa’s) doesn’t punch you in the metaphorical gut, then I don’t understand you.

Hans says, “But with you I’ve found my place,” (probably referencing the jerk move he would later make in the film), but Anna says “But with you I see your face,” which to me originally sounded like a really dumb line meant solely to rhyme.  When I thought about it, I realized the significance a simple acknowledgement from someone Anna cares about would mean.  Elsa has been hiding herself from Anna the entire film to protect her, which Anna obviously isn’t aware of.  But the idea that to her love is an open door is bizarre considering the only love she’s ever known has been a closed door.  To her, Elsa being hidden away is like a wall in their relationship (haha.  it’s literally a wall though.) but to Elsa love is a closed door.  Elsa is showing Anna she cares about her more than herself by locking herself behind a door, but nobody bothered to tell that to Anna.

Later on during the First Time in Forever reprise, we see Anna demonstrate her mindset of love being an open door by inviting Elsa to come back with her.  Love, to Anna, is working through things together – which is probably what her parents taught her.  Love, to Elsa, is keeping your problems and mess away from everyone else – which is exactly what her parents taught her.

Essentially, anything bad that happens in this movie can be chalked up to the King and Queen of Arendelle being really horrible parents.  They abused Elsa, they ignored and isolated both of their children, and they elaborately and deliberately lied to Anna.  The fact that Anna has a skewed idea of what love is is the mildest form of damage that could come out of parenting this bad.

I think it’s safe to say I’m not alone in this theory: 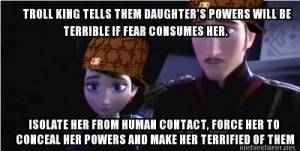